Albert Einstein said the definition of insanity is doing the same thing over and over again and expecting different results.

I don’t call that insanity.

I call it faith. 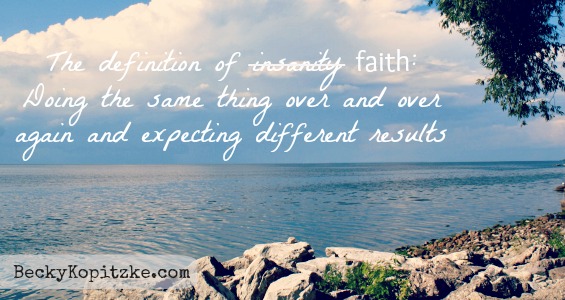 There’s a story in the gospel of Luke where Jesus is sitting in Simon Peter’s boat speaking to a crowd along a lakeshore. When he finishes preaching, he tells Simon to put the boat out into deep water and let the nets down for a catch.

“Simon answered, ‘Master, we’ve worked hard all night and haven’t caught anything. But because you say so, I will let down the nets,’” (Luke 5:5).

Can’t you just picture Simon rolling his eyes? Oh, come ON, Jesus, we already spent the entire night on this useless boat and I’m telling you, the fish aren’t biting. Been there, done that, ain’t gonna happen.

Again and again, Simon and his fishing buddies had tossed out their smelly old net with no results. Eventually they decided the fish had won this round, rowed back to shore—probably exhausted—and washed out their fishing gear. Time to go home and eat breakfast, right? So why does Simon drag his net back out anyway?

Because Jesus said so.

And look what happens.

“When they had done so, they caught such a large number of fish that their nets began to break. So they signaled their partners in the other boat to come and help them, and they came and filled both boats so full that they began to sink.” (Luke 5:6–7)

Wow. Jesus didn’t only give Simon what he hoped for—a net full of fish—but two boats filled with fish. So many fish, the darn boats couldn’t handle the load!

Peter could’ve chosen to tell Jesus no—there’s no point in rowing out again. But he didn’t. He trusted him even when the circumstances appeared fruitless. So Jesus rewarded Simon for his faith by giving him immeasurably more than he could ask or imagine (Ephesians 3:20).

What are you asking God for right now?

Where in your life are you tossing out your net time after time with no results?

For my fellow moms who hauled their tired limbs out of bed every 90 minutes last night—and the night before, and the night before—to feed a hungry baby who still can’t smile. You’re just waiting for that first three-hour stretch of sleep, glorious sleep.

Or the mother who juggles the physical and emotional demands of caring for a special needs child. Day after day, you pour out your heart with little return.

Are you doing the hard work of repairing a hurting marriage?

Or praying—every—single—day—for your prodigal child? For miraculous healing? For two pink lines to appear on that stick, even though month after month of infertility tells you it’s not going to happen. This will never change.

Because at any moment, God could decide—today is the day. I’m going to fill your nets so full, your boat won’t be big enough to carry all my blessings.

Do you want to know the most interesting part of this story? In the end, after Simon had caught the biggest haul of his life—a catch that probably could’ve earned him a month’s or even a year’s worth of wages—he chose to walk away from it all.

“Then Jesus said to Simon, ‘Don’t be afraid; from now on you will catch men.’ So they pulled their boats up on shore, left everything and followed him,” (Luke 5:10b–11).

In our family life, we think we’re waiting for the big haul of fish—for the baby to sleep through the night, for the wayward child to behave, for the illness to heal or the marriage to be restored. We imagine that’s the goal, the answer to so many hard-fought prayers.

But Jesus says, not so. He has something more important in mind.

Maybe the purpose of your “insanity” is to draw you closer to your Savior. To discover how he fills your needs and knows everything you don’t know. Whatever your challenge is, even as you get up again tomorrow and face it all over again, will you trust him? Will you believe that one day he’s going to fill your net beyond capacity? Then maybe, just maybe, when that gift is in your hands, you’ll realize it’s nothing, really—compared to knowing the Giver.

Photo by the lovely and talented Carol Grandlienard