Curious about the new Prime original movie Troop Zero? I was, too. On the surface what looks like an endearing family movie of underdog champions is actually a much deeper, poignant exploration of social injustice and personal triumph. While the primary characters are kids (and a talented crew of them at that), unfortunately Troop Zero is NOT a kids’ movie, for one main reason. 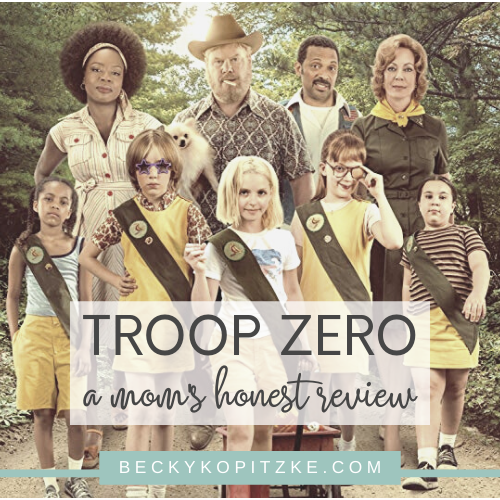 I was surprised at the pervasive cussing throughout this film, considering it was granted a PG rating. Maybe that’s a sign of our desensitized culture, but in my book any screenplay that drops swear word after swear word is not appropriate for kids, even under “parental guidance.” The dialog is packed with “hell” and “a**” as well as a few free-flying appearances of “sh**.” If you’re especially cautious about the words your kids are exposed to in media, then Troop Zero is not for you.

However, I’ve got to acknowledge the language in this film is culturally authentic. Just because I don’t want my kids to hear it doesn’t mean it’s not the kind of language these characters would’ve spoken under the circumstances. Troop Zero takes place in small-town Georgia in 1977, a community divided among the “haves” and “have nots.” (One of the scrappy kids is actually named “Hell No.”) Young Christmas Flint and her redneck attorney father Ramsey (played by Jim Gaffigan) do their best to persevere after the death of Christmas’s mother. Ramsey’s compassion for his criminal clients puts him in debt as he accepts avocados for payment rather than cash. His spitfire legal assistant Rayleen (played by Viola Davis) reluctantly acquires mothering responsibilities for Christmas, who believes her departed mom is in outer space with the aliens. The plot is centered around Christmas’s desire to form a troop of misfit Birdies (like Girl Scouts) so she can compete in the annual Birdie Jamboree. The grand prize is a chance to record a message to extraterrestrials in NASA’s Golden Record.

Overall, Troop Zero is a well-made film, expertly acted—especially by a cast of children—and the characters undergo personal transformation involving themes of friendship, identity, and overcoming adversity. I found myself rooting for the underdogs and wanting to poke out the bully’s eyes, which shows the film succeeds in tugging our heartstrings.

However, as a family movie, there were just too many red flags for my conservative momma standards.

Thankfully this film contains no sexual scenes or boyfriend-girlfriend content, which is probably one of the reasons Troop Zero settled on a PG rating. But be advised one of the characters is a boy who prefers hairstyling over football and is labeled a girl-boy. I didn’t view that as overtly transgender (although he does wear a skirt—the Birdie uniform) but rather a misfit kid trying to be himself amidst pressure from his father to grow up a tough guy. The conflict is portrayed as humorous throughout, and the boy—Joseph—is a loyal friend to Christmas, a child who is otherwise viewed as an outcast.

All things considered, unless profanity is not an issue for your family, I would not recommend watching Troop Zero with kids. But it’s worth checking out for date night with the hubster. Compared to so many other options on TV, Troop Zero is relatively clean adult entertainment. Just wear your filter. And get ready to poke somebody’s eyes out.

What to Read Next: My Favorite {Quick!} Family Time Activity