If you’ve logged into Netflix lately, then you can’t avoid the promo clips for Tall Girl, a new original film about a 6-foot-1 high school student who falls for an (equally tall) foreign exchange student. The trailer scenes are both hilarious and intriguing, and the film’s PG rating might make you wonder if this movie is appropriate for your kids.

I wondered the same thing. So I watched it—with my daughters. Here’s my honest review. 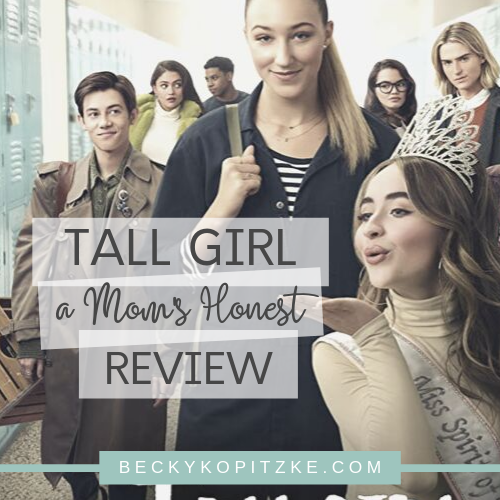 Storyline
All her life, Jodi Kreyman has been off-the-charts tall for her age. Peers see her as a freak and poke fun at her height constantly (their most common dig is, “How’s the weather up there?”), and even Jodi’s own parents struggle to accept and understand her. Add to the mix a gorgeous beauty-pageant-star older sister of average height, and Jodi is enveloped in deeply rooted insecurities that have come to define her perspective of herself and others. She dreams of meeting a boy taller than she is, and when foreign exchange student Stig Mohlin arrives from Sweden—where tall kids aren’t unusual—Jodi gets her first taste of feeling “normal.” The plot develops into a love triangle further complicated by bullies, social castes, and a makeover transformation involving more than just exterior appearance.

Positive Aspects
Overall, Tall Girl delivers an important message of learning to love yourself the way God made you. Jodi experiences tremendous growth in confidence and self-awareness as she learns to accept who she is. She identifies her strengths, owns up to her mistakes, and discovers that what truly matters is not what a person looks like on the outside.

Jodi’s relationship with her older sister is sweet and endearing. I was afraid the film would dish up another pretty-sister / ugly-sister rivalry, but big sister Harper is actually one of Jodi’s biggest supporters throughout the story. She plays an important (if not somewhat shallow at first) role in helping Jodi realize her own unique beauty.

Jodi also has two close friends—Fareeda and Jack (known as Dunkleman)—who recognize and encourage all her amazing qualities. These pals offer the bulk of the film’s comic relief, and yet they’re not entirely unbelievable nor annoying. Their loyalty is admirable, especially in the face of peer pressure. Jack in particular experiences a parallel transformation in which he, like Jodi, takes a dip in the “popular pool” only to realize the emptiness of shallow relationships.

Negative Considerations
Language—There is no hard-core swearing, but we caught several uses of “oh my God” as well as a few uses of “hell” and “damn.” If your approach is to avoid all exposure to these words, then this film is not for you and your kids. However, as my girls grow older, I choose to “chew” the largely positive features while “spitting out” the gristle. We talk about why saying “oh my God” is not okay, yet my children also understand they’re going to hear it plenty outside of our home, so we learn from an early age to filter the bad from the good.

Sexual content— Near the beginning of the film, Dunkleman makes a suggestive remark to Jodi, which will likely go over younger kids’ heads, but still—it’s an impure ingredient to take into consideration. There is also a scene in which the school dance team wears very short shorts and tight shirts while gyrating to music. Several girls wear crop tops throughout the film.

Tall Girl contains no nudity or sexual scenes; however, there is some boy-girl kissing. Nothing heavy, but still, it’s kissing—so if you generally avoid that altogether, again, this movie isn’t right for you. I only recently started allowing my girls to watch films containing light romance, and if there’s a kissing scene then we just say “ewww, kissing” and move on—or in some cases I’ll fast-forward through it. In one scene, Jodi kisses a boy she doesn’t like just to make Stig jealous. I could’ve done without that part, but then it did result in a lesson on being true to yourself.

Other negative aspects of the story include bullying, peer pressure, kids poking fun at other kids, and one scene in which teens are at a party holding plastic cups filled with what we can presume is alcohol, although that is never made clear. In the end, though, the party is deemed a bad idea (the host student gets punished by his parents), and the bullying leads to valuable life lessons. Throughout the movie it’s clear that the kids who treat Jodi poorly are the “bad guys” while those who treat her kindly are viewed as the movie’s heroes. A couple students cross the line between “good” and “bad,” which teaches us a lesson on social pressures as well.

Conclusion
If you’re comfortable filtering out some negative words and kissing scenes, and if you think your children are ready for teen social drama that ultimately leads to an uplifting conclusion, then I recommend Tall Girl for the positive message and redemptive storyline that encourages kids to love the skin they’re in. The movie is laugh-out-loud funny in parts and sweetly heartwarming in others. Overall the story sparks some important topics to discuss as a family, such as trusting God knew what He was doing when He made us each unique, what are the qualities of a true friend, and why do inner qualities and character matter more than outer appearance.

What to Read Next: Why I Won’t Tell You to Avoid That Book