I just discovered something about my younger daughter.

Yes, I know, considering I’ve lived with the kid for four years now, observing her every move and mood—you’d think I would’ve picked up on this before.

Because my daughter doesn’t demonstrate shyness in the usual way. No blushing cheeks, no hiding behind my legs. No sweet whispers or nervous tears.

My girl? She gets downright cranky.

It all makes sense to me now. 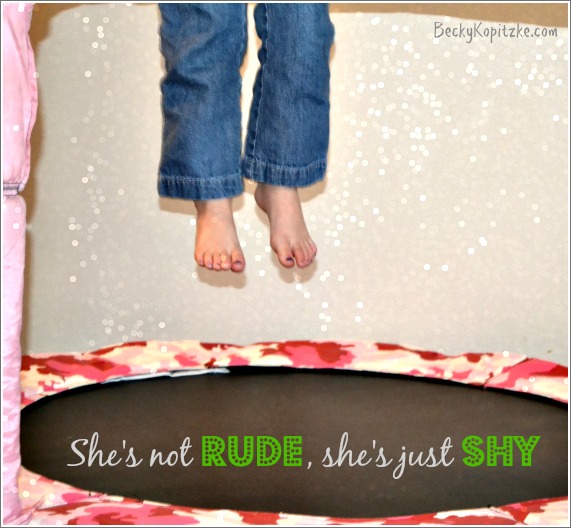 Last week, after church, our family stopped at the fellowship café to chat with friends when a little boy called my daughter’s name from across the narthex. “Look, sweetie,” I encouraged her, “it’s your buddy, T! You can run and play for a bit.”

Instantly she jerked her head up, searched across the room, spied her friend and took a swift step in his direction—then froze. She cast her eyes to the floor, stuck her thumb in her mouth, turned away and scowled. “Hmmmph!”

“What’s wrong? T wants to say hi to you. You love chasing after each other. Go on.”

“No!” She crossed her arms and gripped her elbows. I looked closer across the room and saw her friend was already being chased—by his three older sisters.

“Sweetheart, you can play with T’s sisters, too. I’m sure they’d be happy to have you join their game.”

I muttered some weak explanation to the boy’s mom (my friend) about my daughter skipping a nap. She must be tired. Overstimulated. Hungry.

Anything but rude. Please believe me.

Later, in the car, I twisted in the passenger seat to face my daughter. “Why didn’t you want to run and play with T? He’s a nice friend. He likes running with you.”

“Well, I did want to play with him!” She raised her eyebrows. “But I was scared!”

Now let me explain something here. My four-year-old is, presumably, fearless. She jumps off playground equipment and trampolines and couches of varying heights. She knocks around plastic dinosaurs until one of them is declared “dead” and the other dinosaurs race in to eat it. She strikes up loud conversations with people ten times her age and regularly insists that everyone—parents, friends, Sunday school teachers—call her by her self-appointed super hero aliases “Golden Girl” or “Bolt.”

Not much intimidates her.

Or so I thought.

“Sweetheart, you were afraid of T’s sisters? But you’ve met them before. They’re very nice. Why were you scared?”

“They’re bigger than me.”

Yes. Yes, they are. How do I explain to a four-year-old that a ten-year-old is not a giant?

I didn’t even try. In my daughter’s world, her fear was true and justified. And quite honestly, I was relieved.

Because for months now, I’ve worried that my daughter is becoming antisocial and mean.

Think about it. At four years old, my daughter is only now reaching the age where social interaction is required. In earlier stages, it was perfectly acceptable for kids to parallel play while ignoring each other or attempting to steal toys out of one another’s hands. We absorbed it like moms of toddlers do—just part of the deal.

But now, in the preschool phase, children start to develop friendships. And with friendships come expectations, social norms, boundaries. My daughter is simply learning to adapt.

Have you heard the saying, hurt people hurt people? Well, so do insecure people. And frightened people. Stressed out people, awkward people, lonely people, lost people. There could be any number of reasons behind a person’s unloving behavior. Maybe it’s just their way of manifesting something deeper—some painful issue that begs our compassion, not our criticism.

The next time somebody offends you, irritates you, overlooks or disrespects you, why not try giving that person the benefit of the doubt? Smile at her. Pray for her. See what happens when you offer her the friendship she’s afraid of.

Especially if that somebody happens to be my daughter.

She’s just her own brand of shy.

T, little buddy—thanks for being a good pal. Next Sunday, we’ll meet you in the narthex. We owe you a make-up run.