Poop. That’s what I baked.

I didn’t mean to. My plan was to wow the crowd with beautiful chocolate cupcakes for the high school Music Fest. I’m new, right? New to this high school parenting thing, new to this particular school community, new to symphonic band (my daughter had only played on a small worship team up ‘til this point and we didn’t have dessert concerts, so)… naturally I was going to go ALL OUT to serve the band boosters and impress the other moms.

And did I ever.

We just moved houses, right? That means stuff is still scattered in boxes, unpacked in places I don’t remember, and just generally discombobulated. So when I couldn’t find my star tip for the icing bag anywhere in the kitchen cupboards or drawers, no big deal, I switched to the only tip we had on hand—a round one.

Do you know what chocolate frosting looks like swirled atop a chocolate cupcake with a round tip?

A poop emoji. And nothing else. 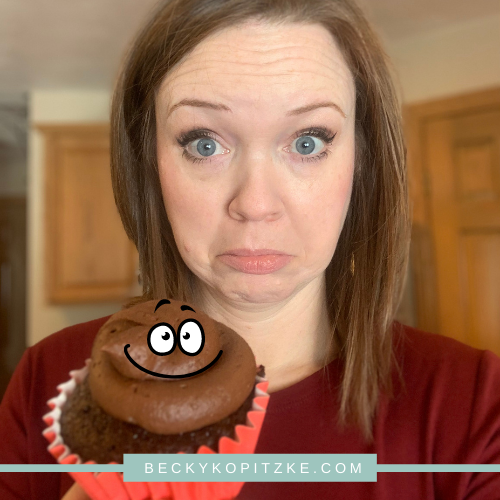 Yes, folks, I created POOP for the biggest high school band event of the year. And after icing a few cupcakes, as I stared at my handiwork and the awful realization shocked my brain, my husband and I burst into peals of uncontrollable laughter. And tears, too—mostly from laughing so hard, but partly from total mortification. How in the world was I going to show up at the concession stand with these ugly things???

Always happy to share my failures in solidarity, I posted this predicament to Facebook, and half a dozen friends told me to stick eyeballs on ‘em and own it.

Maybe they would’ve been really popular with the middle school crowd.

But I couldn’t exactly allow THAT to be my first impression.

Desperate, I attempted to stick a Hershey’s kiss on top, but that just looked like more poop. Then I tried covering up my shame with sprinkles, but the frosting had hardened too much for the sprinkles to stick, so I sunk myself deeper in the cesspool by popping the cupcakes—fully frosted—back into the oven to soften. Dumb, dumb move. The frosting formed an oily melted-butter sheen—so it wasn’t just poop but diseased poop—which was clearly not the direction I was going for.

So I finally conceded defeat and started over—this time with a 9-inch layer cake so I could spread the frosting instead of pipe it.

Now my family is stuck with two dozen useless poop cupcakes, which we must eat in private silence.

What’s my point of this story?

Know when to surrender.

Sometimes we mess up—not even intentionally. We cause problems, predicaments, pain—like a big pile of poop plopped right smack in the middle of life. But rather than acknowledging the mistake, owning it, and asking Jesus to restore us, we just keep trying to cover it up. One misdeed leads to another and another, until we cannot fix the problem ourselves (never could) and THEN we turn to Jesus (which we should’ve done in the first place), after we’ve already created an enormous stream of crap in our wake.

Had enough of this analogy?

Here’s what I really want you to know.

“I have swept away your offenses like a cloud, your sins like the morning mist. Return to me, for I have redeemed you.” (Isaiah 44:22)

God is ready and waiting to redeem and refresh us. We can go to Him at the first sign of trouble, or after a lifetime of trouble. He will always forgive and cleanse. The question is, how much do we want to pile unnecessary suffering onto ourselves before we’re ready to cry quits?

Maybe today you need to ask the Lord for a rescue. Don’t wait.

He can make your dirty frosting white as snow.