“I don’t know why I even bother.” I swept my tired eyes across our living room crime scene and felt my lungs deflate.

Cushions were yanked off the sofa and stacked on the carpet for a makeshift fort. Dozens of books, pulled from their shelf three rooms down the hall, lined the window seat. A pink nylon princess tent wobbled in the middle of the floor, where board game pieces were placed meticulously on kitchen plates—the good plates—for a stuffed animal tea party.

That morning I’d spent two good hours cleaning the house. Now half a day later it was trashed again. 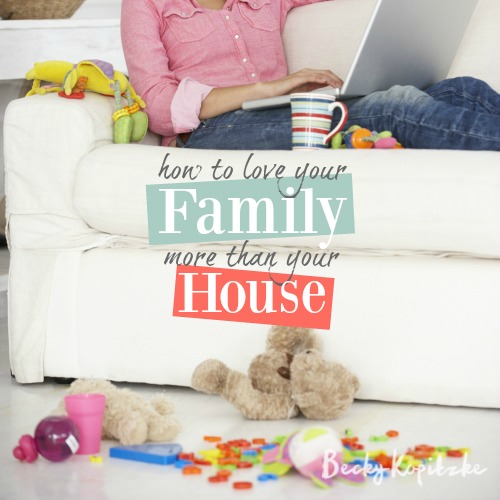 My husband sidled up to me. “Because, honey, if you didn’t bother, we’d have even bigger piles of junk everywhere.”

So what you’re saying is—all my efforts are nothing more than damage control.

But let’s look at it this way. What if I applied the same exasperated view to my other responsibilities? Like cooking, for instance. I can spend an hour preparing a meal that takes less than ten minutes for my family to devour. There might be no food left to show for my efforts, but it’s nonsense to say “Why do I even bother?” because the point was for the meal to be eaten. It wasn’t supposed to last.

Maybe I ought to look at my home that way, too.

Cleaning is helpful. But it’s not supposed to last. Because just like meals aren’t made to look at but rather to consume, a house is not made to admire but to live in.

Think about it. If that’s the case, then perhaps the bigger mess my family makes, the better I’ve done my job—creating an environment where they feel free to live, to be themselves, to explore and imagine, to laugh and to play. Hey, isn’t that the kind of house you want to live in?

Oh. But, you’re not. Because you’re spending all your time picking up after everybody.

They’re having all the fun.

It’s time we moms start having some, too.

So I propose a new attitude toward housecleaning. Yes, it must be done. But consider it always temporary. Scrub the toilet then let it go. Whatever happens to the lid and the bowl between now and the next scheduled cleaning is not your concern.

Because you refuse to love a clean house more than the people who live in it.

As Jesus and his disciples were on their way, he came to a village where a woman named Martha opened her home to him. She had a sister called Mary, who sat at the Lord’s feet listening to what he said. But Martha was distracted by all the preparations that had to be made. She came to him and asked, “Lord, don’t you care that my sister has left me to do the work by myself? Tell her to help me!”

“Martha, Martha,” the Lord answered, “you are worried and upset about many things, but few things are needed—or indeed only one. Mary has chosen what is better, and it will not be taken away from her” (Luke 10:38 – 42).