I’m a sucker for any British period drama, especially one that claims to be family-friendly. So when Netflix introduced Enola Holmes, a part drama, part comedy, part mystery/action original film featuring the fictitious younger sister of detective Sherlock Holmes, I couldn’t resist. My husband and I previewed it together to see if PG-13 meant more “PG” or more “13” (which usually means swearing or sexual themes). Thankfully, we discovered a delightful and language-safe story that both our girls (ages 10 and 13) can enjoy. 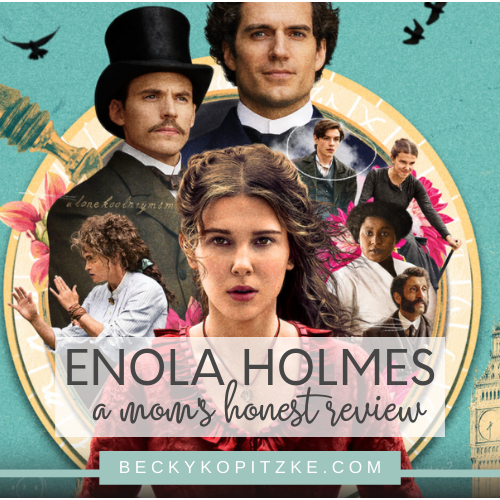 Enola Holmes has been raised by an unconventional mother (played by Helena Bonham Carter) who raised her daughter to value science experiments and martial arts rather than the traditional embroidery and manners training expected of young ladies in that day. When Enola’s mother goes missing, the unworldly teen embarks on an adventure of mishaps to outsmart her genius brother in cracking the case. Along the way she encounters a cast of curious characters, including a young nobleman, a bounty hunter, and an underground community of reformist suffragettes—all of whom weave a tale of intrigue, farce, and heartfelt family drama.

The film delivers a variety of positive themes, including familial love, embracing your uniqueness, and standing up for what’s right. You could interpret the story as appearing to disdain traditional female roles of marriage and motherhood, which concerns me, yet on the flip side a primary theme is the unbreakable bond between a mother and daughter and how far each are willing to go to “save” the other. Feminism is a heavy message throughout the film, yet it’s up to the viewer to determine if you will interpret it from the lens of history, as resistance to oppression of the era in which the film is set, or as a modern commentary on “women power.” Either way, the topic can spark valuable conversations with our children about gender roles and the equal value of both men and women in God’s sight. I will just be sure to add my own commentary for my daughters: By all means, use your intelligence to contribute to the world! But whether you choose to do that in a science lab or a homeschool kitchen, your calling and purpose is of great worth under God.

As for the “13” part of PG-13, it’s primarily due to mild violence. In one scene, a sinister murderer attempts to drown Enola by holding her head in a barrel of water. (She escapes by using her wits and martial arts training, which keeps the film light.) In another, Enola and her friend the young nobleman face this same murderer in a shoot-out. Blood drips from Enola’s head injury, and the murderer takes a nasty crack to the head as well. Yet even these scenes are presented as adventure with a dose of humor. Use discretion regarding whether you want to expose your children to these scenes or not.

Enola, played by young actress Millie Bobby Brown (Stranger Things fans will recognize her as Eleven), is an utterly charming and guileless character you can’t help but cheerlead throughout the film. Her strength and intelligence serves as an admirable example for young girls, yet she’s not the only one who fights to follow her own path. Her young nobleman friend, Lord Tewksbury, also struggles against his family’s expectations to live a dull life in parliament. Together they navigate obstacles and ultimately discover they can be themselves and be accepted and loved at the same time.

{Spoiler alert… not really.} The hopeless romantic in me kind of sort of wanted Enola and Lord Tewksbury to ride off into the sunset, yet thankfully this film didn’t make romance a central crux of the story. Rather, it suggested young people can pursue their dreams and callings and still make room for relationships when the time is right. Independence was balanced with companionship. And in the end, it’s a mother and daughter’s love for one another that concludes the story… if not as satisfactorily as I would have liked. In my opinion, Enola’s mother’s reasons for disappearing were a bit hard to swallow, yet we see forgiveness and unbreakable ties that leave us wondering… what next? Perhaps a sequel is in order. And I’ll be first in line to flip on my Netflix when it arrives.

From one mom to another… happy movie watching.