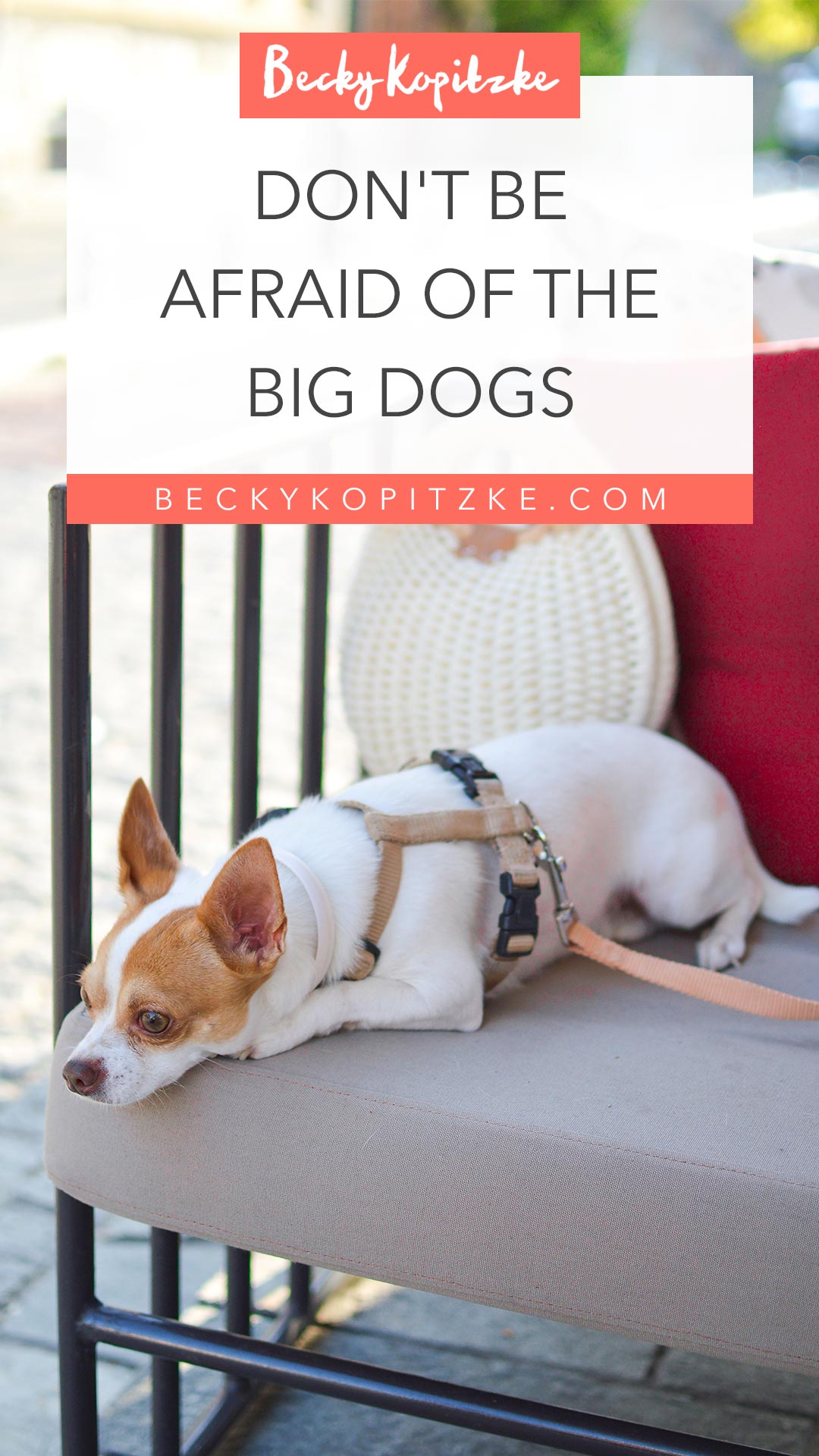 I enrolled my puppy in a training class last fall. It was a pitiful failure.

Somehow my seven-pound Morkie got stuck in a room full of large breed adult dogs. I’m talking German Shepherds, Golden Retrievers, Labs, an Airedale and a couple huge fuzzy Doodles that weigh more than both my children combined. Beautiful dogs, all of them, but compared to my puppy they were monsters. They could’ve eaten him for lunch.

And he knew it. 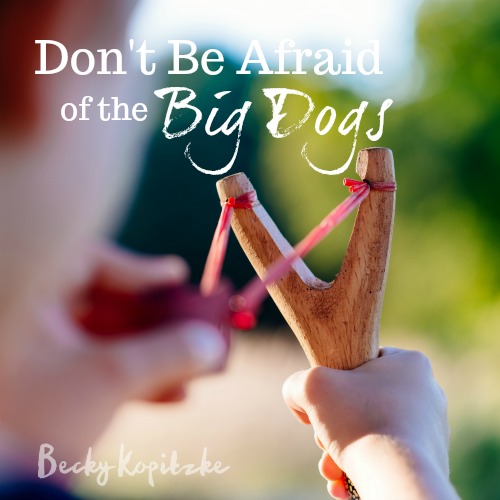 From the moment we’d walk into class—and even before that, in the parking lot, poor thing—my little guy would start shaking and peeing involuntarily. He’d sniff the floor, hide behind chairs, and completely ignore my instructions for an entire hour in the shadow of the big, bad doggie gang. So of course the whole “training” aspect became an exercise in futility.

During a frustrating attempt to get my dog to “leave it!” when I tossed a cracker in front of him (oh please, even humans can’t do that), the trainer pulled me aside.

“Don’t be discouraged,” she said, and then attempted to console me by explaining my dog’s ancestors were originally bred to hunt rats in city sewers; therefore, we can’t expect too much from him. “After all,” she said, “little dogs have little brains. They’re just not that smart.”

Uh. David and Goliath. Ever heard of them, lady?

My dumb dog and I skipped the last two classes. We stayed home eating crackers.

Of course you know this devotion isn’t really about my dog. It’s about us—you and me. Because we’ve got big bad doggie gangs in our lives, too.

That author who has a million Facebook followers and earns a six-figure salary off her blog? Man, I’m just a shivering little pup next to her greatness. Why even try to grow beyond my humble beginnings?

That woman at work who climbed the ladder year after year and now sits in the VP office while you do her bidding 20 hours a week—because you chose family over career. Does she make you feel like an apprentice?

Or what about that family down the street who appears to have it all together—the perfect kids, the sparkling house, the annual vacations to Disney World. Do you measure yourself against them and feel small? Lacking? Hopeless?

“David said to the Philistine, ‘You come against me with sword and spear and javelin, but I come against you in the name of the Lord Almighty, the God of the armies of Israel, whom you have defied’” (1 Samuel 17:45).

When we compare ourselves to others and come up short, what does God want us to do? Well, He does not want us to match sword to sword and strength to strength—as if we, too, need a million Facebook followers or the VP title or the Disney World budget in order to prove our worth. No. Our worth is found in something far more valuable—the name of the Lord Almighty.

That is the measure by which we define our strength, our wisdom, our potential. And it’s SO MUCH BIGGER than the doggie gang.

“I pray that the eyes of your heart may be enlightened in order that you may know the hope to which he has called you, the riches of his glorious inheritance in his holy people, and his incomparably great power for us who believe….” (Ephesians 1:18–19a, emphasis added).

God created you to be you. He created me to be me. We each have inherent value not based on the quantity of our accomplishments or the size of our hips or the force of our bark—but simply because God thought us up. And He loves us. Morkies and Labradors alike.

So next time the proverbial dog trainer (otherwise known as Satan) suggests you’re inferior, look that booger in the eye, Jesus girl, and remember this: You have a slingshot in your pocket. And you know how to use it.

What to Read Next: How to Find Contentment in the Life You Already Have