“Suddenly a great company of the heavenly host appeared with the angel, praising God and saying, ‘Glory to God in the highest heaven, and on earth peace to those on whom his favor rests’” (Luke 2:13–14).

Last Friday my girls performed in their annual Christmas piano showcase. This event had been on our calendar for weeks, but apparently it didn’t occur to me until that afternoon how my children had nothing appropriate to wear. So I found myself running like a madwoman through Kohl’s an hour before the recital, where I grabbed a couple dresses but stopped short of new shoes. My fifth grader wore a pair of mine, one size too big. My second-grader settled for her pink Crocs. Just what every Christmas dress needs, right? 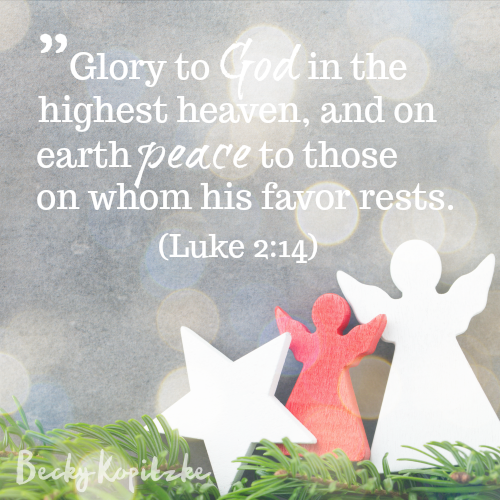 The night before that was the all-school musical. One week earlier, the middle school pageant. And the weekend before that, our community’s downtown Christmas festival, in which my older daughter and I posed as live mannequins in a store window for two hours. We were supposed to be a 1950s duo, but my hair flip totally failed so I looked more like a 1990s frizz mom.

This is my life these days. Prepare, rehearse, doll up, chauffeur.

Tonight is karate graduation… which I showed up for last Tuesday. Apparently I have completely forgotten how to read my calendar. Actually I think it’s my calendar’s fault. It has become so full of notes and dates and holiday obligations, the blessed thing is now altogether illegible. Is your calendar on steroids this time of year, too?

Plus there’s still another week to go, aack? We’ve got Christmas parties, gift exchanges, cookies to bake and teachers to bless. Thank the Lord for online shopping or I’d be in a straight jacket by now. Let’s not talk about how I still have to wrap it all. And for some reason I totally hijacked my common sense and decided to redecorate my house over Christmas break, so I spent half the day yesterday singing on the worship team at church and the other half painting my home office. What is my problem??

It’s not the shoes and the hair and the sparkly outfits that matter.

It’s not the angel costumes or the potluck menus or the boxes under the tree.

All those things are lovely, yes.

But they’re only meant to point us to ONE thing—Jesus. His birthday. His forgiveness. His grace.

Oh how we need His grace.

Two thousand years ago, a host of angels appeared in the sky to proclaim the Messiah’s birth. They could have sung of a hundred different things—God’s power, sovereignty, majesty, brilliance—but they chose to emphasize this:

Peace. For you and me.

Jesus didn’t come to earth in order to drive us to the grave with too much to do. He came to rescue us from that grave. He came to give us peace.

So I’m still going to do all the things. I have to. I have children. But I’m going to cut myself some slack and quit pursuing perfection. Instead I’m choosing peace. Grace. Joy. Freedom.

Even in the midst of all the busyness.

“Let the peace of Christ rule in your hearts, since as members of one body you were called to peace. And be thankful” (Colossians 3:15).

Sometimes peace looks like a pair of pink Crocs. Or laughing at yourself when you got the graduation date wrong. Or ordering pizza two nights in a row just because carpooling to and from rehearsals leaves no time for cooking. Maybe peace even means neglecting the Christmas to-do list altogether while Mom goes to Hobby Lobby to shop for herself. My freshly painted office could use a new rug.

Will you join me?

Think of it as God’s gift to us this Christmas. No shiny bows required.